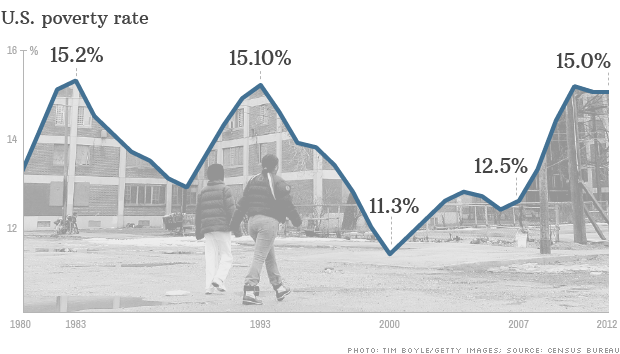 "Years after the Great Recession ended, 46.5 million Americans are still living in poverty, according to a Census Bureau report released Tuesday."
"But taking a wider view reveals a larger problem: Income has tumbled since the recession hit, and is still 8.3% below where it was in 2007."
"This long-term decline in income is troubling to economists, especially as the middle and lower classes have fared considerably worse than the rich. Since 1967, Americans right in the middle of the income curve have seen their earnings rise 19%, while those in the top 5% have seen a 67% gain. Rising inequality is seldom a sign of good social stability."
"The recession also pushed many more people into poverty. In 2010, the poverty rate peaked at 15.1%, and has barely fallen since then. This is the first time the poverty rate has remained at or above 15% three years running since 1965."