Most Americans are one paycheck away from the street

Most Americans are one paycheck away from the street - MarketWatch

"Approximately 62% of Americans have no emergency savings for things such
as a $1,000 emergency room visit or a $500 car repair, according to a
new survey of 1,000 adults by personal finance website Bankrate.com.
Faced with an emergency, they say they would raise the money by reducing
spending elsewhere (26%), borrowing from family and/or friends (16%) or
using credit cards (12%)."

"The findings are strikingly similar to a U.S. Federal Reserve survey
of more than 4,000 adults released last year. “Savings are depleted for
many households after the recession,” it found. Among those who had
savings prior to 2008, 57% said they’d used up some or all of their
savings in the Great Recession and its aftermath. What’s more, only 39%
of respondents reported having a “rainy day” fund adequate to cover
three months of expenses and only 48% of respondents said that they
would completely cover a hypothetical emergency expense costing $400
without selling something or borrowing money."

"Why aren’t people saving? “A lot of people are in debt,” says Andrew Meadows, a San Francisco-based producer of “Broken Eggs,”
a documentary about retirement. “Probably the most common types of debt
are student loans and costs related to medical issues.” He spent seven
weeks traveling around the U.S. and interviewed over 100 people about
why they haven’t saved enough money. “People are still feeling the heat
from the Great Recession.” Some 44% of senior citizens have enough
savings to cover unexpected expenses versus 33% of millennials,
Bankrate.com found."

"But while the jobs market is improving and the Affordable Care Act has
given an estimated 15 million people access to medical care, the Great
Recession does appear to have taken its toll on Americans’ finances; in
fact, they’re 40% poorer today than they were in 2007. The net worth of
American families — that is, the difference between the values of their
assets, including homes and investments, and liabilities — fell to
$81,400 in 2013, down slightly from $82,300 in 2010, but a long way off
the $135,700 in 2007, according to a report released last month by the
nonprofit think tank Pew Research Center in Washington, D.C."
Posted by viplav at 3:28 PM No comments:

Is Global Poverty Falling? Not in Absolute Terms - WSJ

Is Global Poverty Falling? Not in Absolute Terms  - WSJ 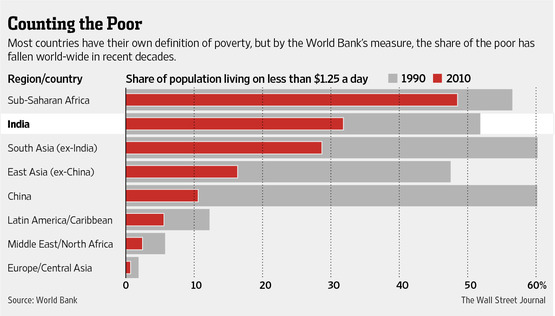 While there has been progress in reducing
the number of people living below the poverty line, this has been
achieved largely by raising those considered ultrapoor to just above the
poverty line, rather than by boosting the standard of living of the
poor more broadly, according to a paper from Martin Ravallion, economist at Georgetown University’s Center for Economic Research.


“There has been very little absolute gain for the poorest,” Mr. Ravallion writes in a new working paper from the National Bureau of Economic Research.
“Using an absolute approach to identifying the floor, the increase in
the level of the floor seen over the last 30 years or so has been
small—far less than the growth in mean consumption.”

“The bulk of the developing world’s progress against poverty has been
in reducing the number of people living close to the consumption floor,
rather than raising the level of that floor,” Mr. Ravallion. “Growth in
mean consumption has been far more effective in reducing the incidence
of poverty than raising the consumption floor. In this sense, it can be
said that the poorest have indeed been left behind.”
Posted by viplav at 6:38 PM No comments: